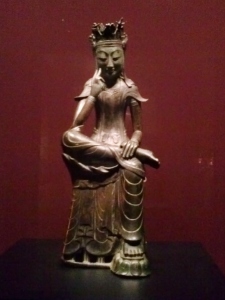 I’ve added a new page to my website called “Just Sit“. It provides some basic information and recommended resources for those just starting – or thinking about starting – a sitting meditation practice. Take a look and leave a comment if you have any other resources to recommend.

My August retreat at Upaya inspired me to strengthen my regular Buddhist practice, something I’ve been thinking about a lot since reading Anyen Rinpoche’s Dying with Confidence, which I discussed in a prior blog. He doesn’t mince words in that book: we must take advantage of the optimal conditions we have now to make our practice stable. Regular practice now gives us the only chance we have of being able to maintain any mental stability in the face of illness and death.

After rereading the book and conducting an honest assessment of my current spiritual practice, I realized that despite decades of being a Buddhist, my practice is far from stable. Over the last few years, thanks to a supportive Sangha, my sitting meditation practice at least has become more regular, but “more regular” is not the standard I aspire to. I decided that I needed to focus on a few short daily practices until they became second-nature. The question became which practices I should commit to.

I have regrettably bounced between a variety of practices without fully committing to one. I read a tremendous amount, often learning about new meditation techniques that I think I should try out, although I’ve not yet firmly established myself in the previous ones I’ve tried. I’ve been particularly remiss with my Tibetan (Vajrayana) practice.  In the Tibetan tradition, lamas (teachers) give empowerments (permissions to do certain practices) relating to different buddhas and bodhisattvas (sometimes translated as “deities”) – all manifestations of enlightened activity who we aspire to become like. Once you’ve received an empowerment and the associated teachings, you are not only permitted to do the practices related to that bodhisattva, you have also vowed to regularly do mantra recitation and sadhana practice, during which texts are chanted and various visualizations performed. These vows are referred to as “samayas”.

Although empowerments in Tibet traditionally were hard to obtain due to the rigors of travel and the closely held nature of the teachings, it’s not difficult in the West to receive many different empowerments and thus make many different commitments to practice. In the past, I often used as an excuse for my lack of practice that I felt overwhelmed by the many empowerments and teachings I’d received and that I did not know which one was “the best” for me to commit to. On reflection, I realized that this line of thinking was undermining my spiritual path. I was like someone who wants to take a great trip, but who never gets past the stage of reading tour books and studying maps. At some point, you have to commit to a destination and set forth.

I found Garchen Rinpoche’s advice particularly salient on this issue. He said:

Even though you have received many empowerments, if you understand the nature of the deity, you understand that it is sufficient to only practice a single deity. By practicing a single deity genuinely, you are accomplishing the essence of all deities. In fact, it is better to focus on the practice of just one deity, because then it will be easier to habituate to the deity to the point where you will not forget about the deity . . . Sometimes people worry about receiving too many empowerments because they think that they cannot keep all the samayas. Actually if you practice the root samaya of love, compassion and mindfulness, you are keeping all samayas of all deities, even if you only recite the mantra of one deity . . .

Various deities appear in order to suit the various thoughts and inclinations of sentient beings, but actually their nature is one and the same. The nature of all deities is bodhichitta. Therefore, if you practice bodhichitta and mindfulness, and only recite the mantra of one deity, you are keeping all your samayas. If you do not practice bodhichitta and mindfulness, no matter how many different mantras you recite, you are not keeping your samayas.

Garchen Rinpoche concludes by emphasizing that the important point is to commit to a daily practice to which you have a heart connection and to follow through on that commitment. This is perfectly in line with Anyen Rinpoche’s advice to focus on the repetition and even memorization of particular practices in order to be able to connect to those practices at the moment of death.  Anyen Rinpoche says that anyone can have a regular meditation practice. He suggests that we make an initial commitment to do a particular practice every day for 100 days. That is a reasonable period of time to truly test our commitment and achieve some success. At the end of the 100 days, we can assess the results of our practice and determine whether we want to adjust it.

Before my trip to South Korea, I had already decided to commit on my return to a morning practice routine consisting of a short Dharma reading, 20 minutes of sitting meditation, and a short Chenrezig (bodhisattva of compassion) sadhana practice. That would take me about 35 minutes to complete, which I felt was long enough to be a significant commitment, yet short enough that I could follow through every day. I selected seven short Dharma readings to rotate through, based on Anyen Rinpoche’s suggestion that it is best to become very familiar with just a few readings. The hope is that someday when I am ill or dying and someone reads those teachings to me, even if my mind is disoriented by pain or confusion, the familiarity of the words will make me receptive to the message within.

During my templestay, I discussed my proposed daily routine with Yeoeun Sumin, who urged me to add 20 prostrations to the beginning of each practice session. She told me that I had a very positive energy, but that my mind was weak and fearful. Prostrations, in addition to meditation and Dharma study, would help to strengthen my mind.

The first full day after returning home, I made up a spreadsheet with 100 entries and a heading for each of my four commitments: 20 prostrations in the Korean style, short Dharma reading, 20 minutes sitting meditation, and short Chenrezig sadhana. Beginning with that day, each morning, as soon as I get up, before changing into work clothes or eating breakfast, I go do my practice. Afterwards, I mark the date on the next line of the spreadsheet and check off the four commitments. This morning I successfully completed day 33.

Each day, I feel my practice strengthen.

The short Chenrezig sadhana I do is from Lama Kathy Wesley’s website (“Chenrezik for Beginners”). Her text contains excellent instructions as to the visualizations that accompany the chanting. I provide this link because Lama Kathy writes that “It has been said by great teachers such as Khenpo Karthar Rinpoche that the Chenrezik practice can be done even by those who have not taken refuge or empowerment.” Therefore, I am not breaking any samaya by sharing the practice text. To hear how the practice sounds when chanted in Tibetan, here is an excellent audio recording of Lama Kathy performing the practice: